Tuesday, April 16: Up early, wanting to get around Jacksonville before rush hour, I pulled the Roadtrek back on I-95 at 5:45, leaving behind the Florida Welcome Center. As a place to spend the night, it was level, but not either dark or quiet! It was a cloudless dawn; I was beyond Jacksonville by the time the sun came up, but it was a very uneventful sunrise. I angled over to St Augustine, stopping on the draw bridge while a parade of boats went through, and working my way south on A1A, the coastal route. I enjoyed glimpses of the Atlantic, pulling over sometimes to let all those poor commuters who had to be in a hurry rush by.  Before leaving the barrier islands I overshot the turn, and found a place to park so I could walk and get the kinks out, by this mosaic fountain. Sun’s not very high, yet! 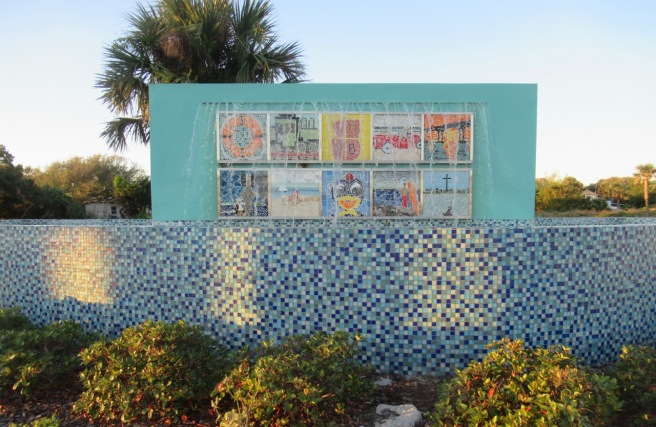 I pulled in to Ellen’s driveway in Ormand Beach at about 9:00, and it was great to catch up with an old friend and my e-mail! Her house is surrounded by native plants; it looks like Dr Seuss was here: 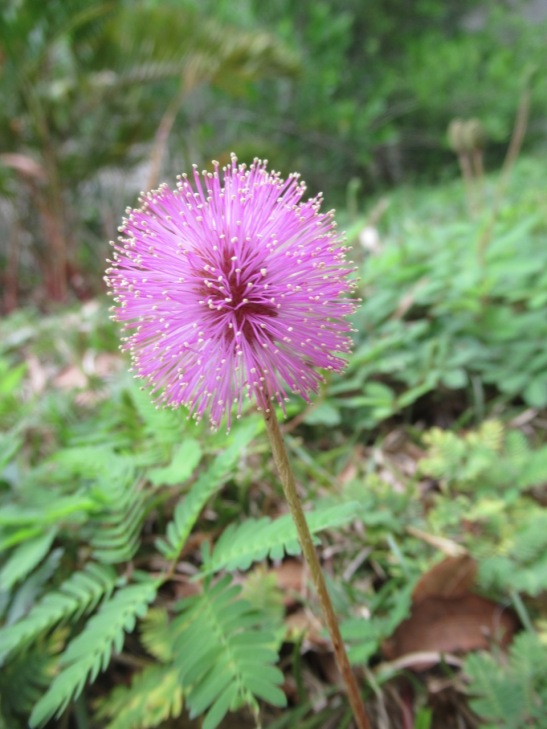 It seems as though each Powderpuff/Mimosa flower lasts only a day or two – but the supply next to where the camper was parked seemed to never end.

Wednesday, April 17: While Ellen was off at her late afternoon poetry group, I took the kayak to the Ormand Beach Central Park Canoe Trail. There are five lakes connected by navigable channels; I toured four of them. 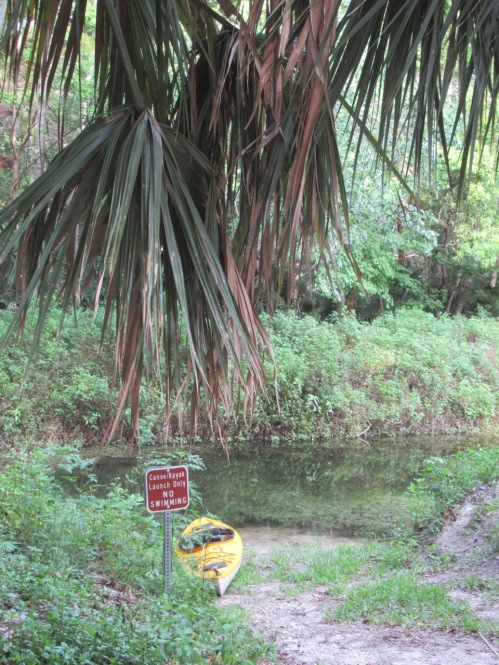 These fish were swimming just in front of the launch – I saw larger ones, but this was the best photo. They were about 6 – 8 inches long.

This is definitely NOT New England! 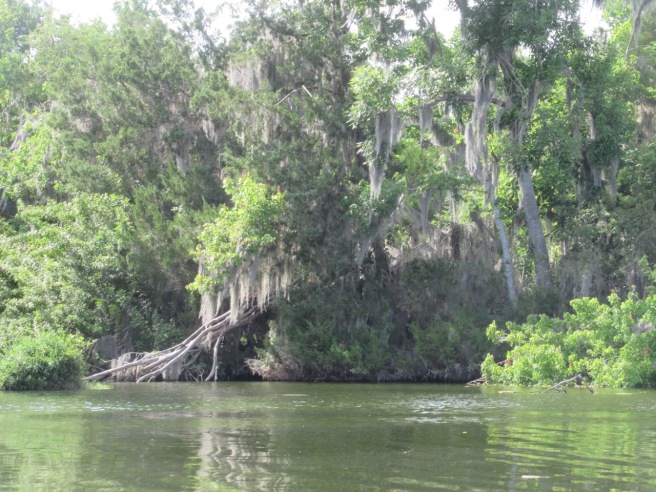 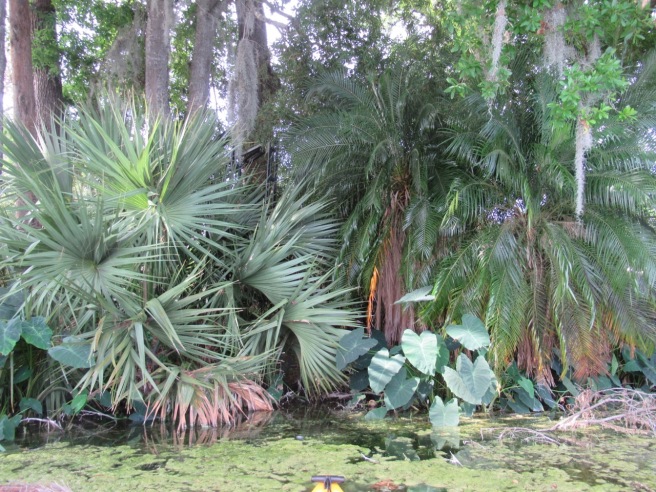 These egg masses belong to the Florida applesnail – wonder how it got that name! And if I’d known that was what they were, I would have tried to get a photo of the snail that goes with them – but I hadn’t identified either the egg masses or the snails, yet. 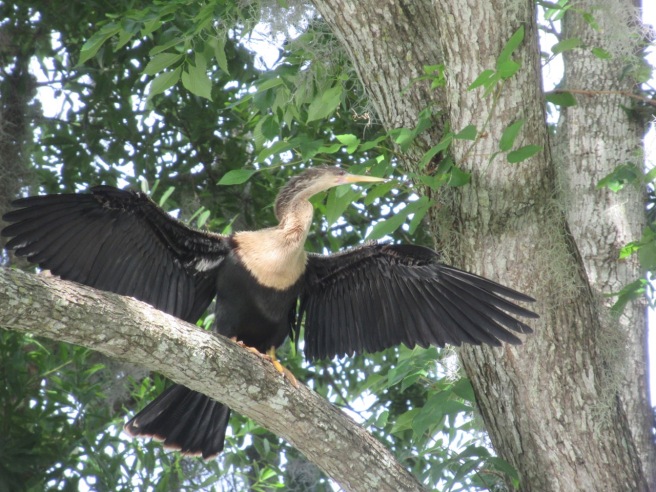 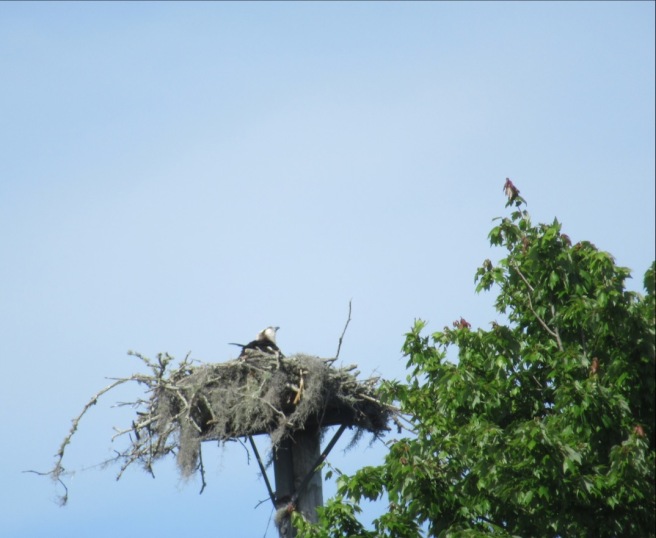 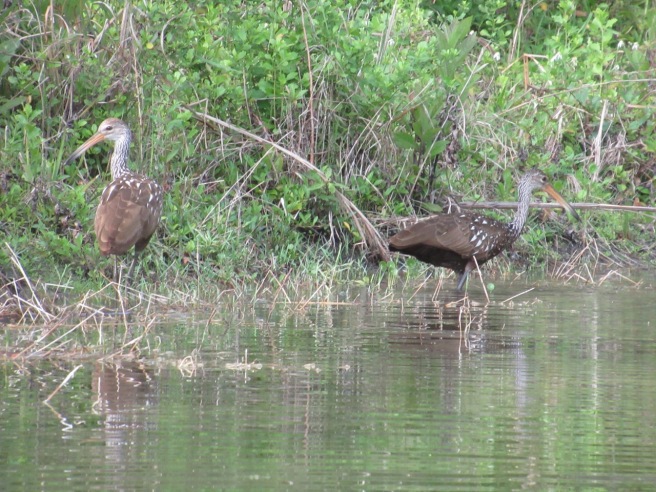 and the non-native Muscovy duck: 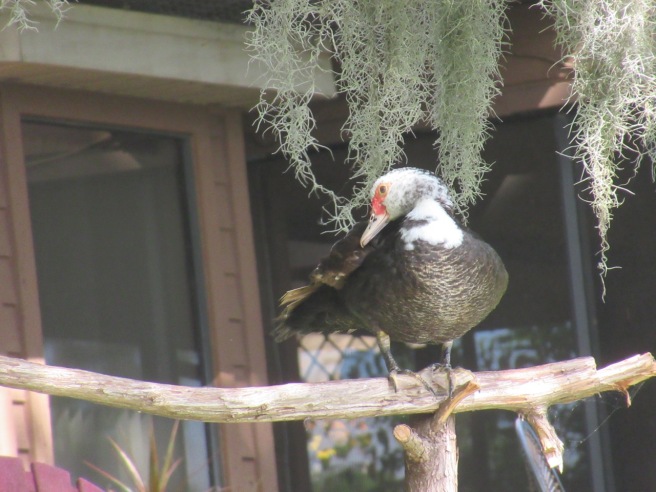 This was the first time I’ve seen bananas fruiting since I was in Hawaii over 10 years ago: 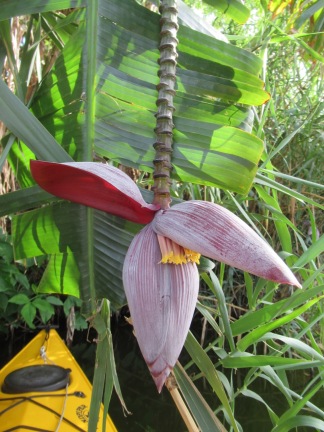 My sister came through with the name of this plant for me – nothing like having a plant physiologist in the family! Its common name is rattlebox; it’s Sesbania punicea. Sure is pretty, even though invasive – 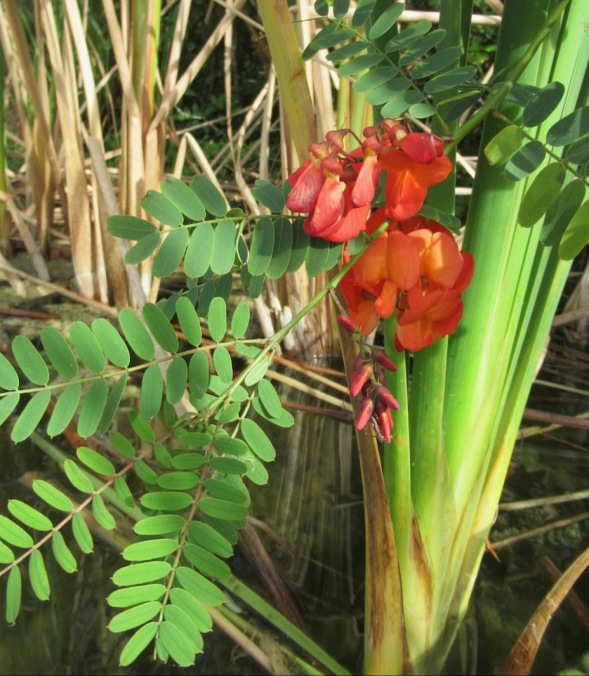 There were a couple of dead ends, and a fisherman in the middle of the narrow channel to the last of the five lakes; I didn’t get to that one. The two corrugated culverts made interesting reflections in the water.

Back to the house after a couple of hours on the water, with perfect weather, getting there with just enough time to take a quick shower before Ellen came home.