People have grown sunflowers in New England for a long time; this year, with the invasion of Ukraine, there are many more – along with Ukrainian flags, paintings of sunflowers on walls, flags with the country’s name and sunflowers. A trip to Connecticut meant that I’ve been in four states in four days; there were sunflowers, and more sunflowers – in cutting gardens, for sale by the side of the road, in yards, along the roadside. These are only the ones that were easy and safe to stop and get photos.

This was the first house I photographed for the color while commuting between Vermont and Connecticut. I didn’t realize it would become a blog series! So I didn’t label where it was taken – somewhere in central Massachusetts. I picture someone walking around putting paint chips together and taking time and thought to get it right.

A stop at WEBS, Northhampton, Massachusetts, and they have appropriate signage for their fiber obsessed clients! All I needed was a cable for my set of interchangeable needles, so I can get on to the next project.

With driving, driving, driving in between! Starting June 21, I was cooking for 20 – 30 (depending on which meal) for Quaker Spring, including all the shopping, and preparing ahead what I could. It was a constant job, feeding very appreciative Quakers, for five days of three meals plus snacks a day.

Quaker Spring is basically summer Bible camp for adults, and was held this year at Woolman Hill, in central Massachusetts. The people who participate are wonderful – especially for an unprofessional cook, who is not all that familiar with that kitchen, and does not chop as quickly as one would like! I did have help every meal, for at least a half hour, and people not engaged in deep discussion often came through to see if I needed anything.

Woolman Hill is a wonderful conference and retreat center; there are some photos that are classics – every photographer notices the gloves at the dish washing station!

I’d never met a psaltery before; it’s essentially a bowed harp, and one woman played in the dining hall a few times, keeping the cook entertained. I loved it.

It poured rain, feeding the moss –

And there were some good sunsets.

Then it was time to head for Iowa, and Friends General Conference. I had a young man carpooling with me on the drive west. The first night we spent in 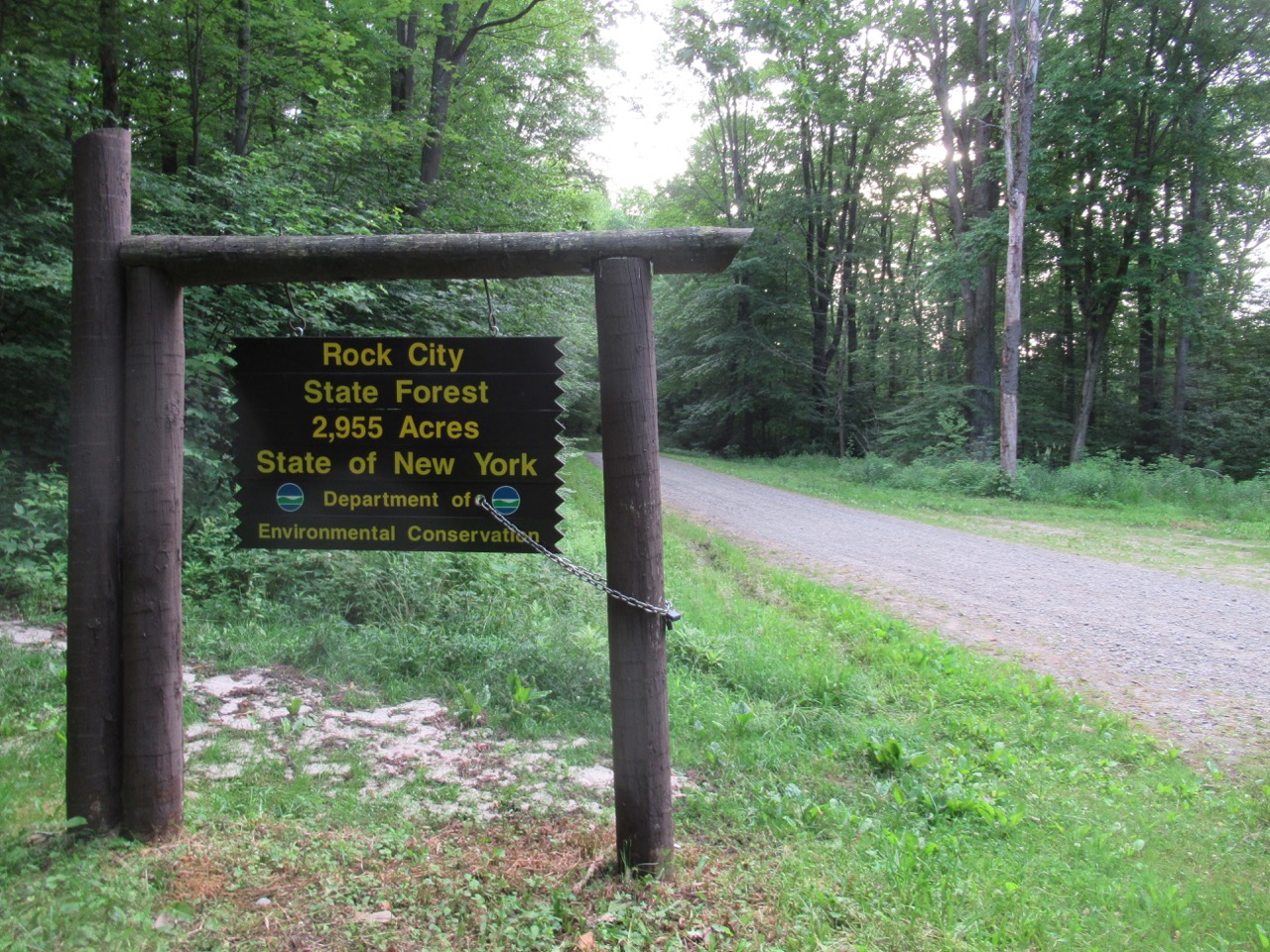 It was flat enough, and certainly dark and quiet – and free – and I could have chosen to park at the old CCC site closer to the entrance. But we had plenty of daylight to explore, so did that, about as far in as we could get! We did go past several other possible sites, deciding that drier ground was better than risking getting the Roadtrek stuck. My fellow traveler uses a hammock tent, so looks for a pair of suitable trees. The second night we found the

This area is not free, but there was no way to pay there, and the office was closed by the time we got there, and certainly wasn’t open when we left at dawn; I owe them a whopping $8.00! And it is flat. Very flat.

Some images from an early walk around the area: 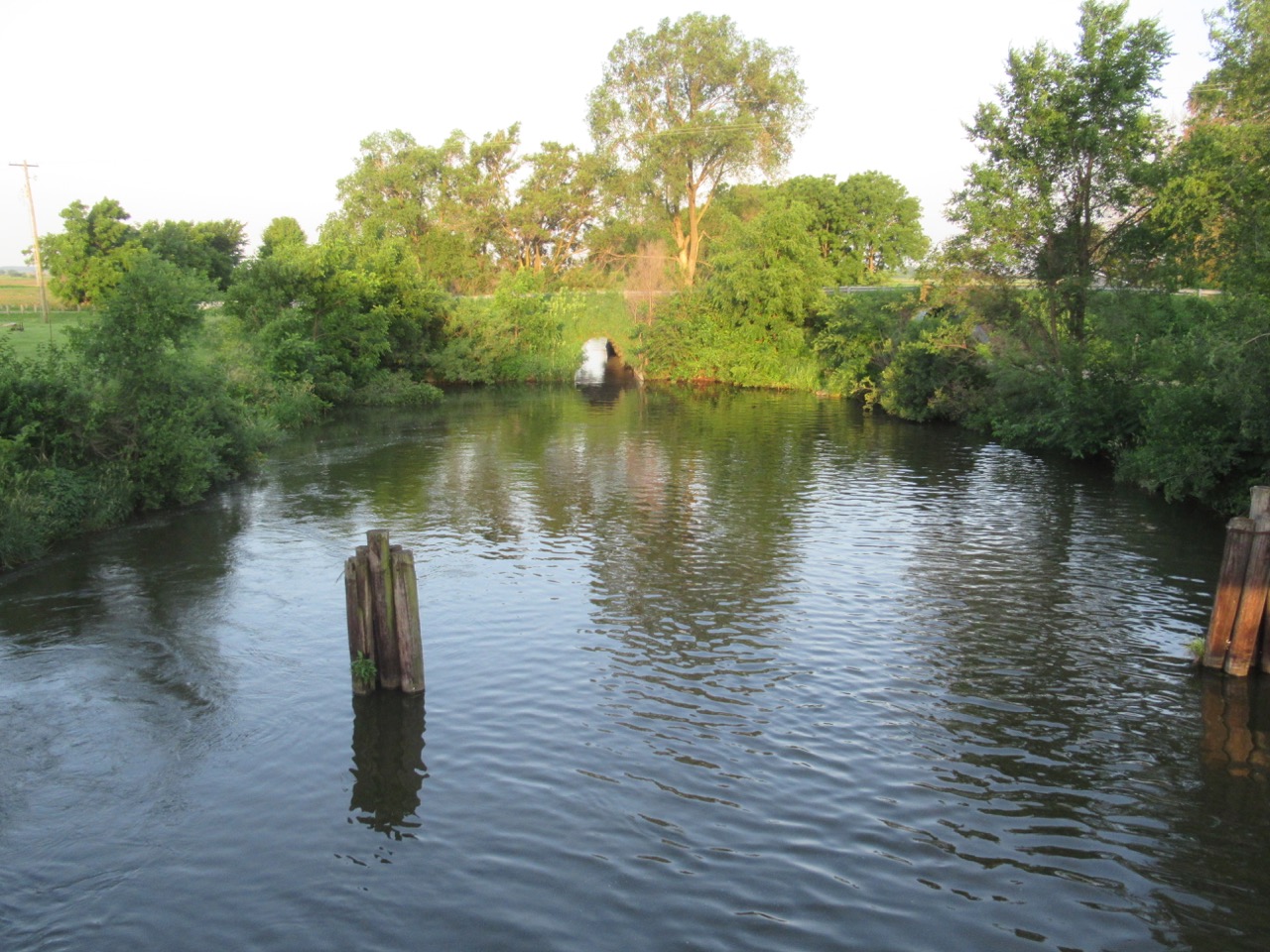 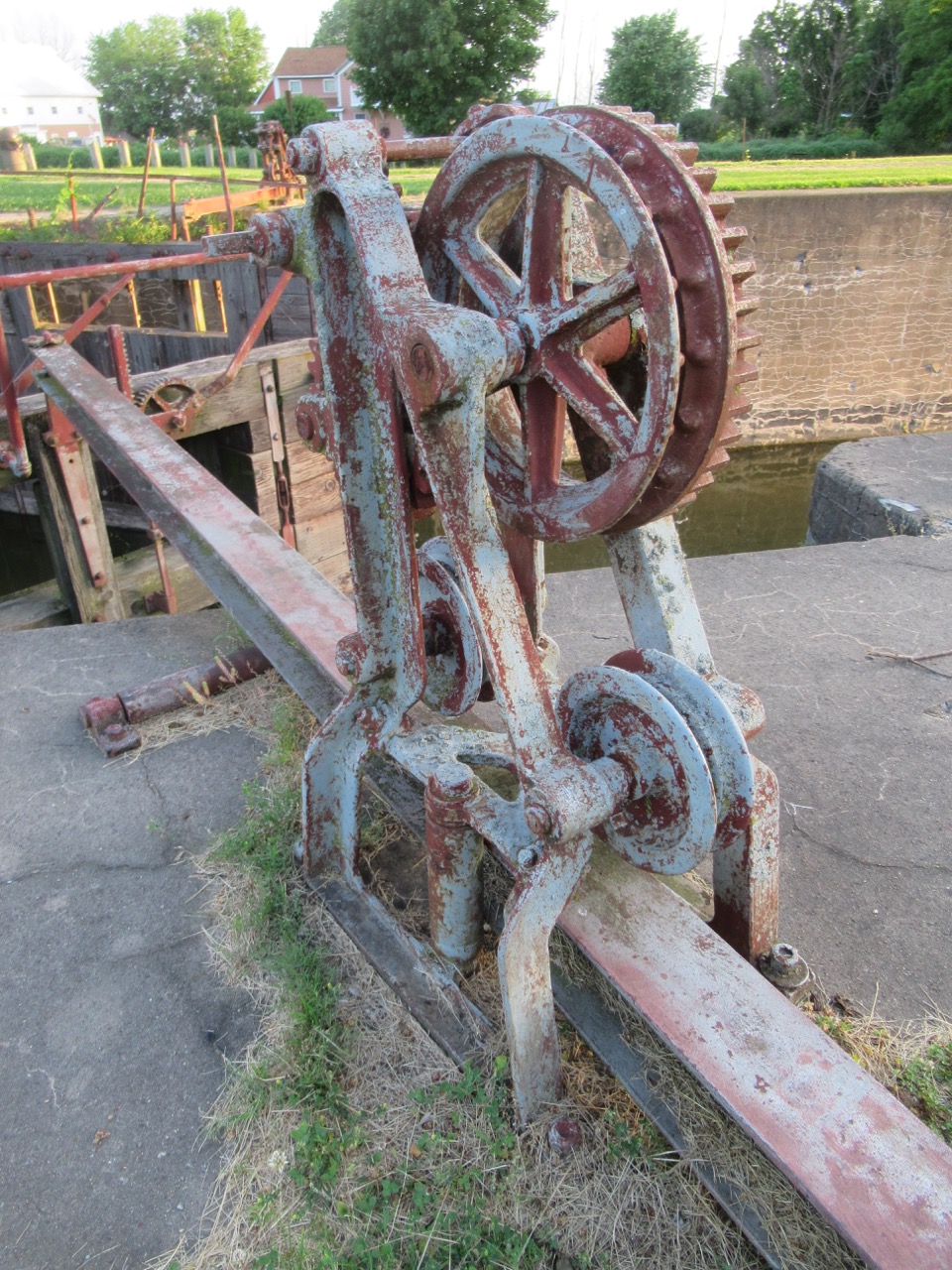 And as were driving out to Route 6, we crossed the canal again: 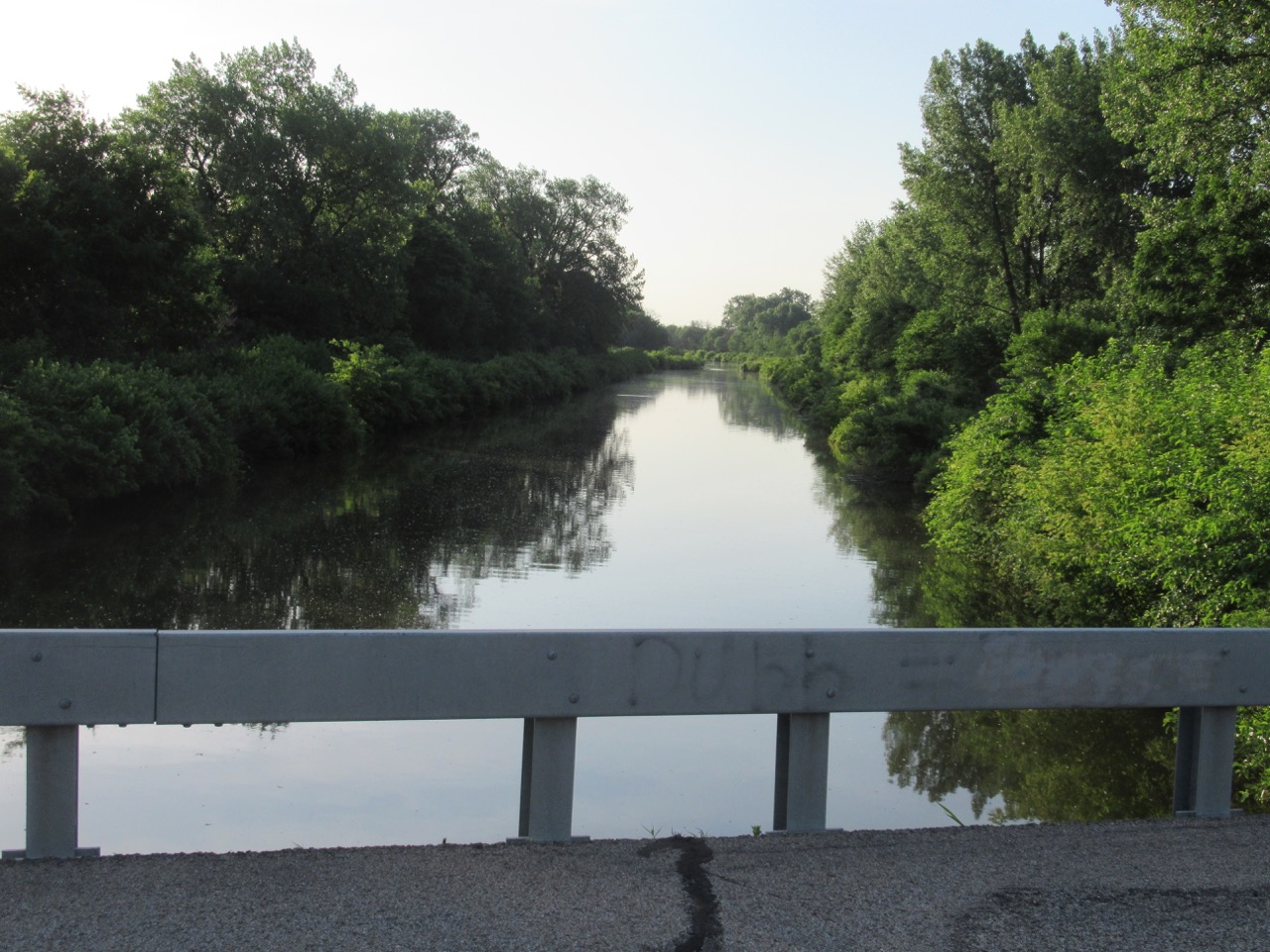 Then it was into Iowa. We stopped at the welcome center, admired their sculpture, 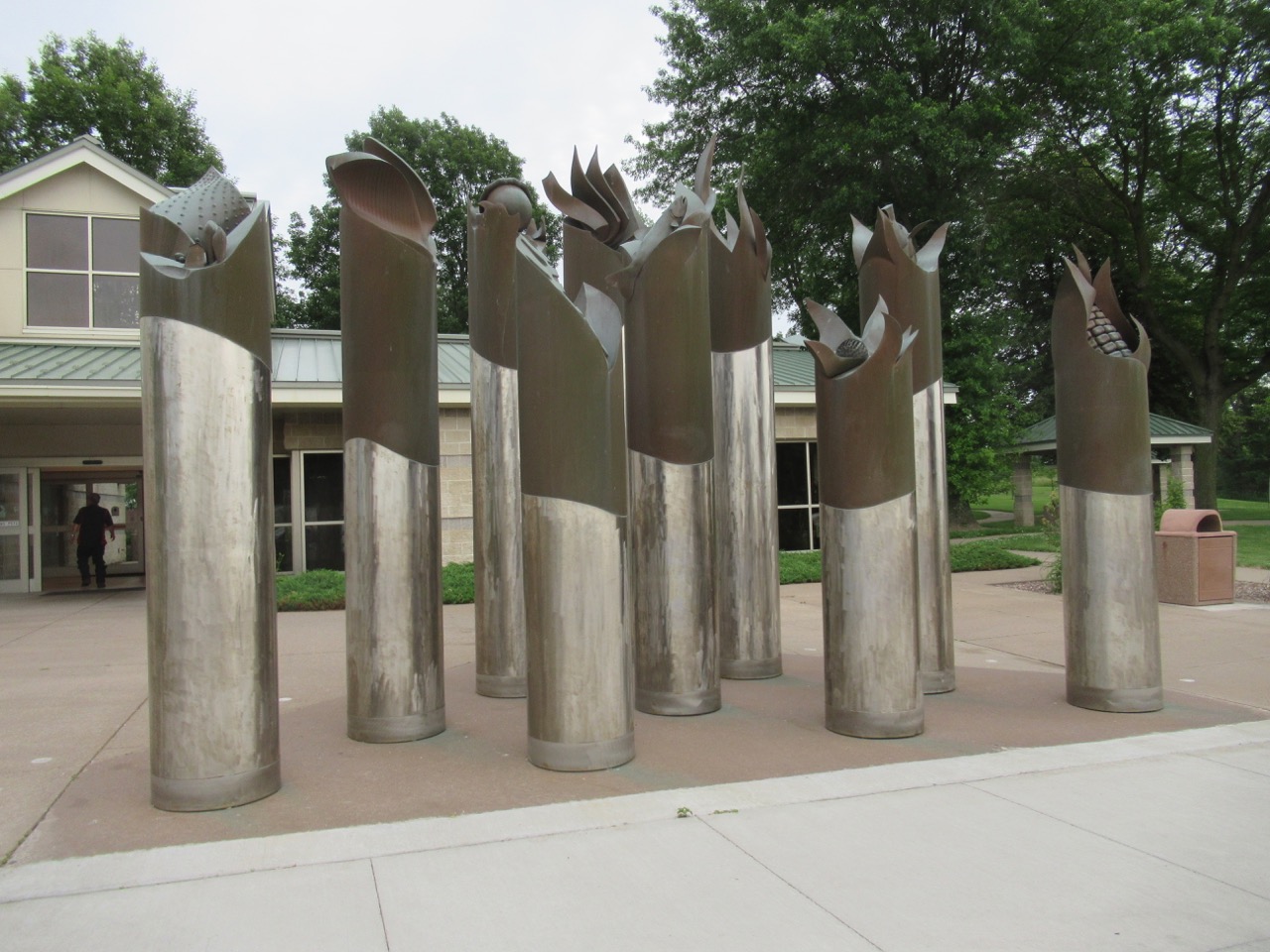 and thought it ironic that the smoker chose to stand directly under the “No Smoking” sign. 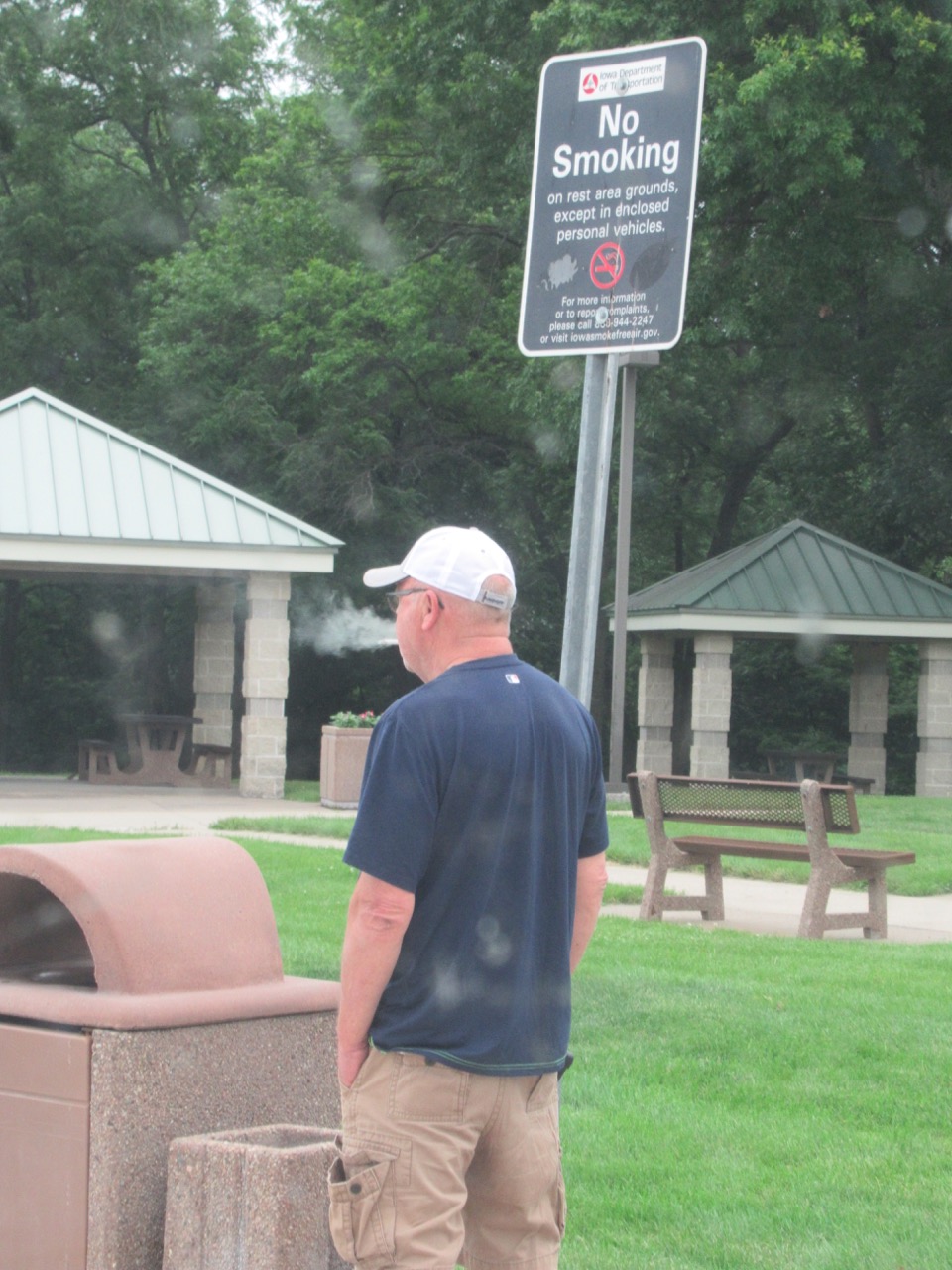 Then it was on to Grinnell,  and a week of hanging out with Quakers.