Saturday and Sunday, October 1 – 2: This is the first time I’ve been to the Vermont Sheep and Wool Festival, held in Tunbridge, Vermont. The first day I went with a couple of my Quaker Knitting Goddess friends, and didn’t take any photos – I regret not getting some of the sheep shearing, but maybe another year! The second day I went with two friends from Six Loose Ladies; they were demonstrating spinning, and I just caught a ride with them, and mostly hung out at their display with them and worked on my knitting. But before that, before the crowds got to where taking photos was difficult, I wandered through the fairgrounds, still resisting buying any yarn (or fleece, or animals!!); I did buy a discounted book the first day.

Of course there were sheep (and sheep dog herding demonstrations, and sheep shearing).

My favorite sheep were the Blacknose, mostly because of how personable they were! One was persistently curious about my cane; all wanted affection and attention.

And llamas and alpacas:

There was, of course, fleece of all breeds and colors.

There was equipment, from spinning wheels to buttons and yarn bowls:

In addition to the spinning demonstration from Six Loose Ladies, people were weaving, spinning, knitting and rug hooking. This was our area:

The weather both days threatened gray, and turned sunny and warm. Some areas of the hillsides were very colorful, with the leaves turning, although it’s not the most striking display of leaves I’ve seen in Vermont. The company was good, and I got a couple of inches done on the sock I’m working on. But one of the things I enjoyed most was seeing all of the hand knit, crocheted, and woven garments people were wearing, showing off their fiber creations!

One of you asked if you’d get to see the yarn I brought back from my aunt’s apartment, now that her knitting has slowed considerably. The above, laid out on a double bed sheet, is most of it – I’ve pulled out the yarn to make the sweater she’d planned for her daughter. And since, I’ve also pulled the yarn for a sweater for another of the cousins. Most of the yarn is natural fiber (with some glitz and shiny synthetic). There’s lots of really wonderful alpaca, and the left side of the photo is a pile of mohair and mohair blends. Not all of this is in sweater quantities; a lot of it is left from sweaters my aunt has previously knit. There are also five nearly completed sweaters; the cousins get first crack at them, and I’ll weave in the ends (and make longer, if needed and if there’s yarn to do it!)

This was my haul, on the Great Northern Yarn Haul. I started out really, really disciplined, looking and willing to buy only the yarn for two cowls for the nurses who cared for Mom during her last months. But once I had those, there were other forces pulling at my wallet! From right to left,

*Pale pink: The Fibre Company, Cirro (alpaca/cotton/wool) for one of the aforementioned cowls. So SOFT!!

*Hunter orange: Plymouth Encore (acrylic/wool) because the hat I made for my sister and brother-in-law to wear       walking/hiking in Vermont, especially during hunting season, is looking very bedraggled – and it’s hard to find that   color!

*Yellow: Dirty Water Dyeworks (merino/nylon) for the second cowl. With a color name of “No. 2 Pencil”, how could I   resist?

*Gold: Sun Valley Fibers (merino/cashmere/nylon) This is the one I bought for me – probably for socks. I didn’t           really need more sock yarn – but it felt so nice!

*Indigo: A Wrinkle in Thyme Farm (Romney/Border Leicester/Finn flock, 10% nylon, dyed at the farm) They were          generous enough to let me park in their parking area for the night with my camper. I had to buy something! So         when I mentioned to one of the Quaker Knitting Goddesses in Portland that I wasn’t sure how I’d justify an                unplanned yarn purchase, she suggested that she could use a pair of socks, and it had been a while since I’d           knitted her anything. OK!

*And Poems Sock: (wool/nylon) Probably socks for my sister; these are her colors. And it was half price. I’m such a   sucker…

One of my last stops was Mapleview Farm Alpacas, in Brandon, Vermont, which mills their own yarn; here are some of the fiber producers:

And my last stop was in Rutland, where Green Mountain Yarn and Fiber has their mascot on the porch:

In all, over the course of a couple of weeks, I visited 27 of the 28 shops and farms on the list. The one I missed wasn’t open the day I was in that part of Vermont. I enjoyed some gorgeous scenery along the way, explored areas I’d not otherwise have visited, knitted with others, drooled a lot over some amazing fiber products, and got to meet some new people. I now know where to source some special fibers, and feel inspired! 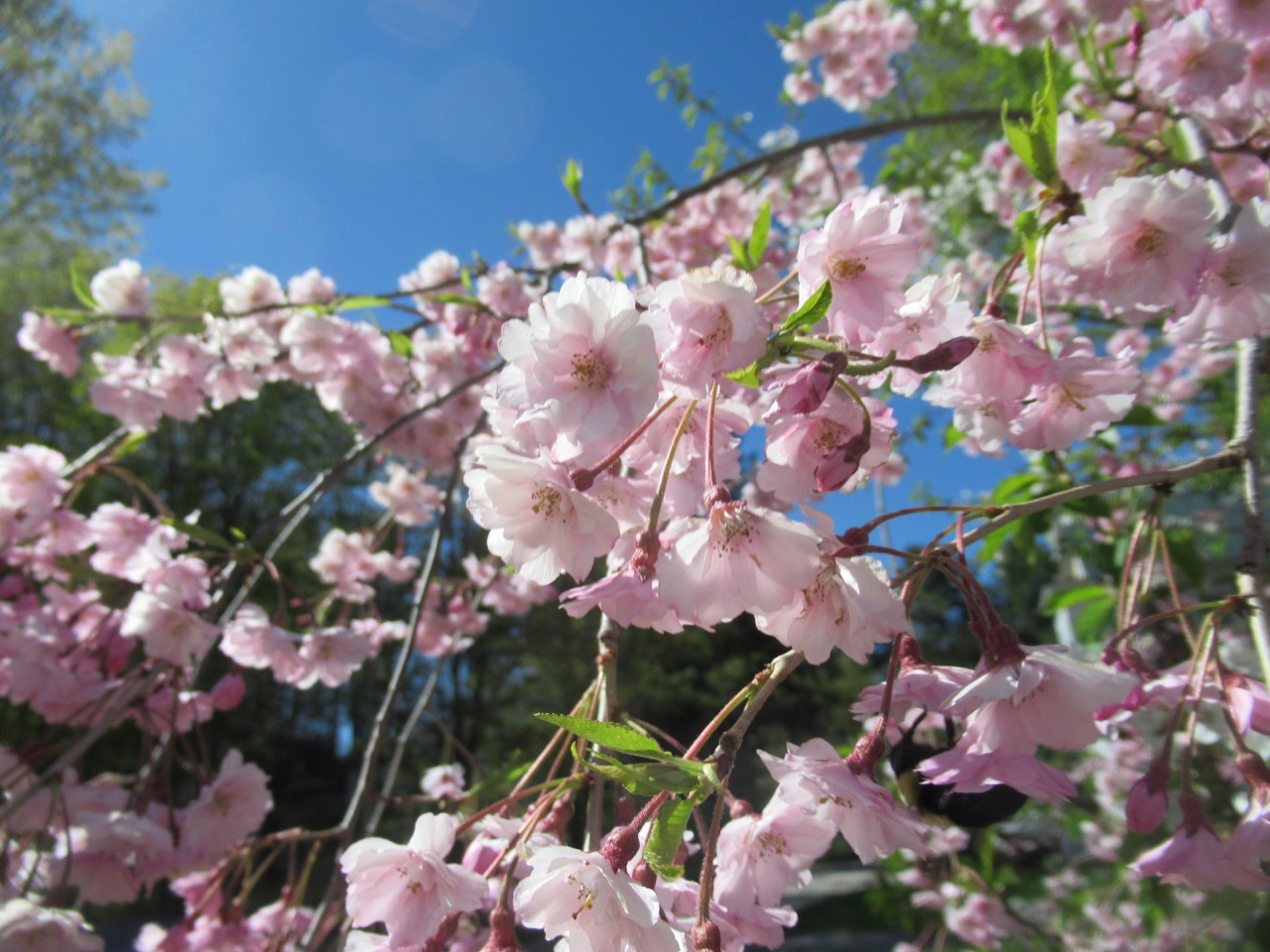 May 11 – 12: It was a Quaker Knitting Goddess weekend, organized around the New Hampshire Sheep and Wool Festival in Deerfield, NH. I stayed in Concord with Lola and her family –

Saturday a group of us went to the Festival, and enjoyed the beautiful day; for once, it was perfect weather. There were animals – sheep, rabbits, llamas, alpaca:

There was a costume contest, for different age groups (of the humans, I assume!) Oh, the indignity of it all – what self-respecting sheep would wear a saddle?!? or a taco, for that matter!

From animals comes fleece, often labeled with the name of the animal from which it came, as well as breed.

From fleece, the next step is roving, some natural and some dyed, for spinning or to use as is: 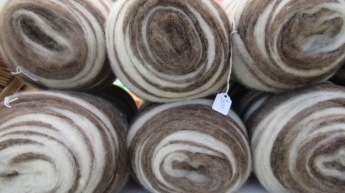 Or maybe you need a sheepskin? 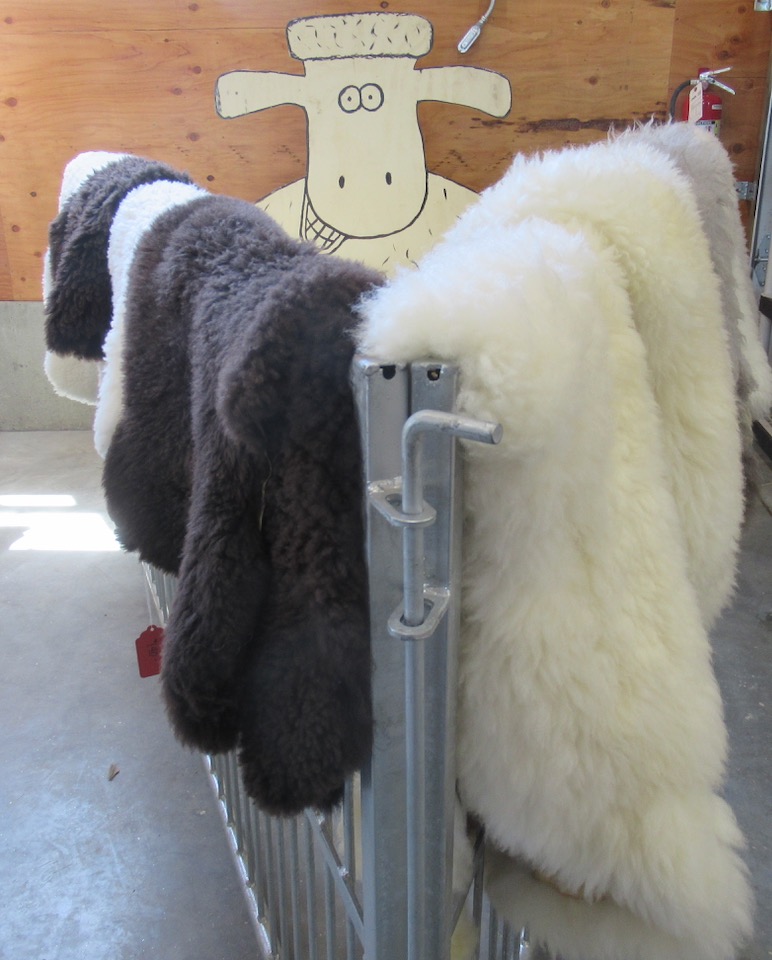 Or, if you are looking for yarn of almost any color, weight, or texture, you can probably find it here. 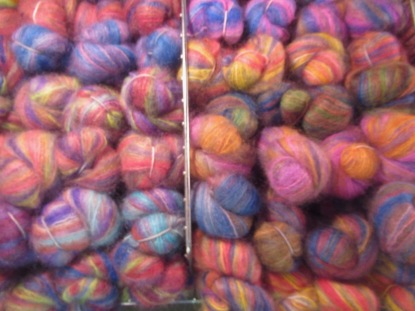 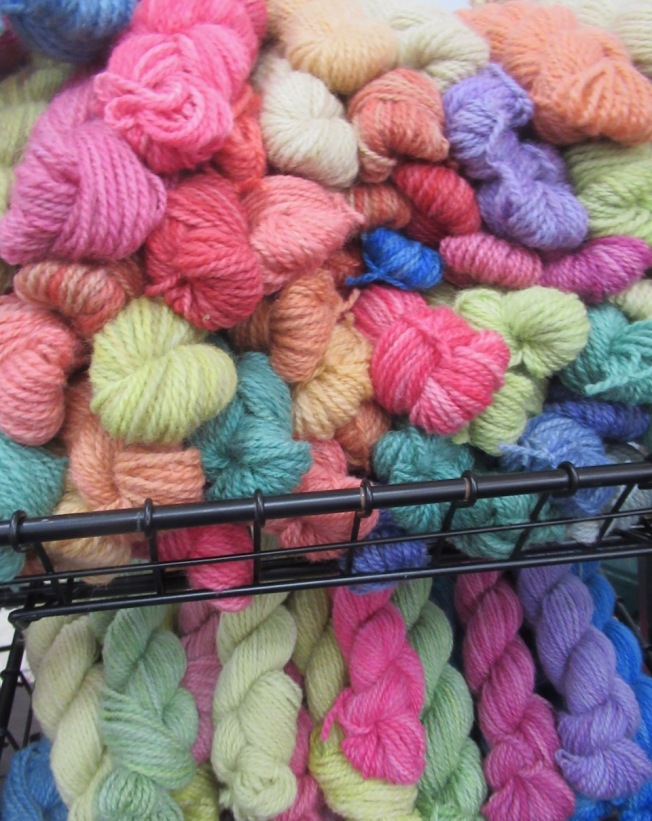 If you don’t spin, or weave, or knit, 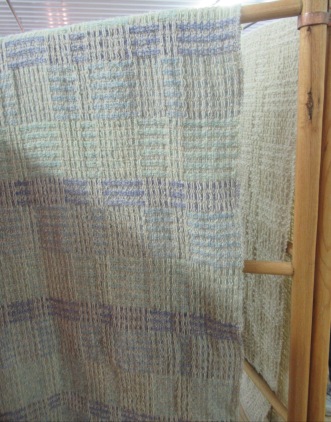 or felt, but you want a finished product, that’s available, too. 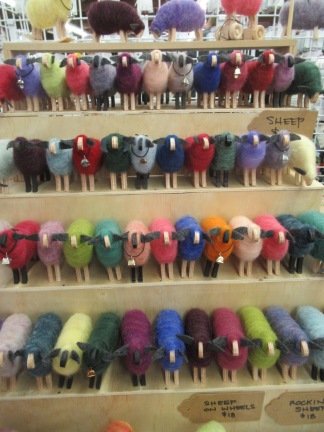 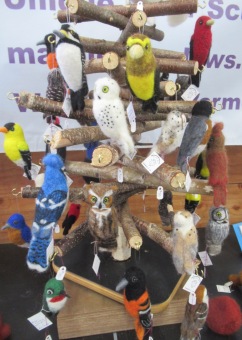 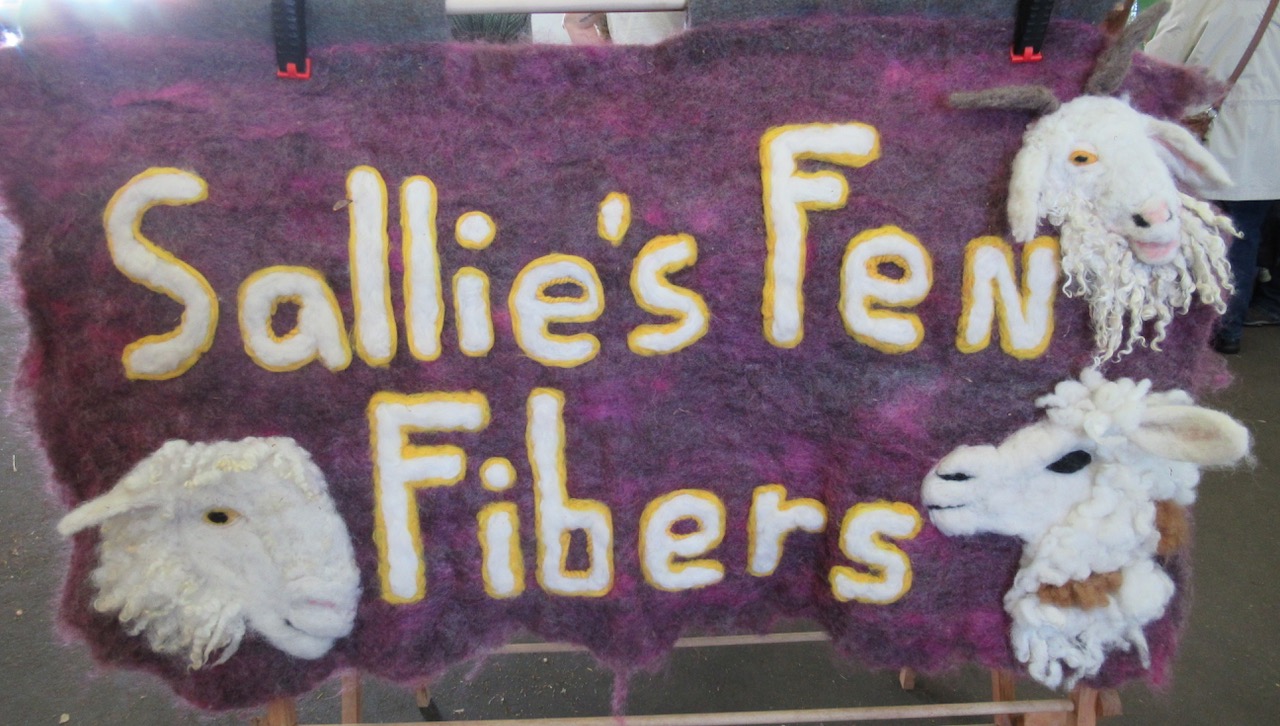 There was music played in the space between two of the barns.

What I most enjoyed was sitting in the sun, watching the sheep dogs being put through their paces. There were four for this demonstration, sometimes only one or two working, and once, all four to show how they worked together. There was one uncooperative sheep, one teen acting dog, one old and experienced dog who just had to look at the sheep for them to go where directed. 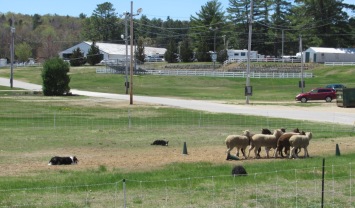 When they’d done their job, the dogs were rewarded with some frisbee – and one, at least, would bring back the number requested! Told to fetch two, or four, that’s what she did. And then, being too warm, I guess, jumped in the water trough. Then it was back to the house for some knitting (and chocolate eating) time – after all, 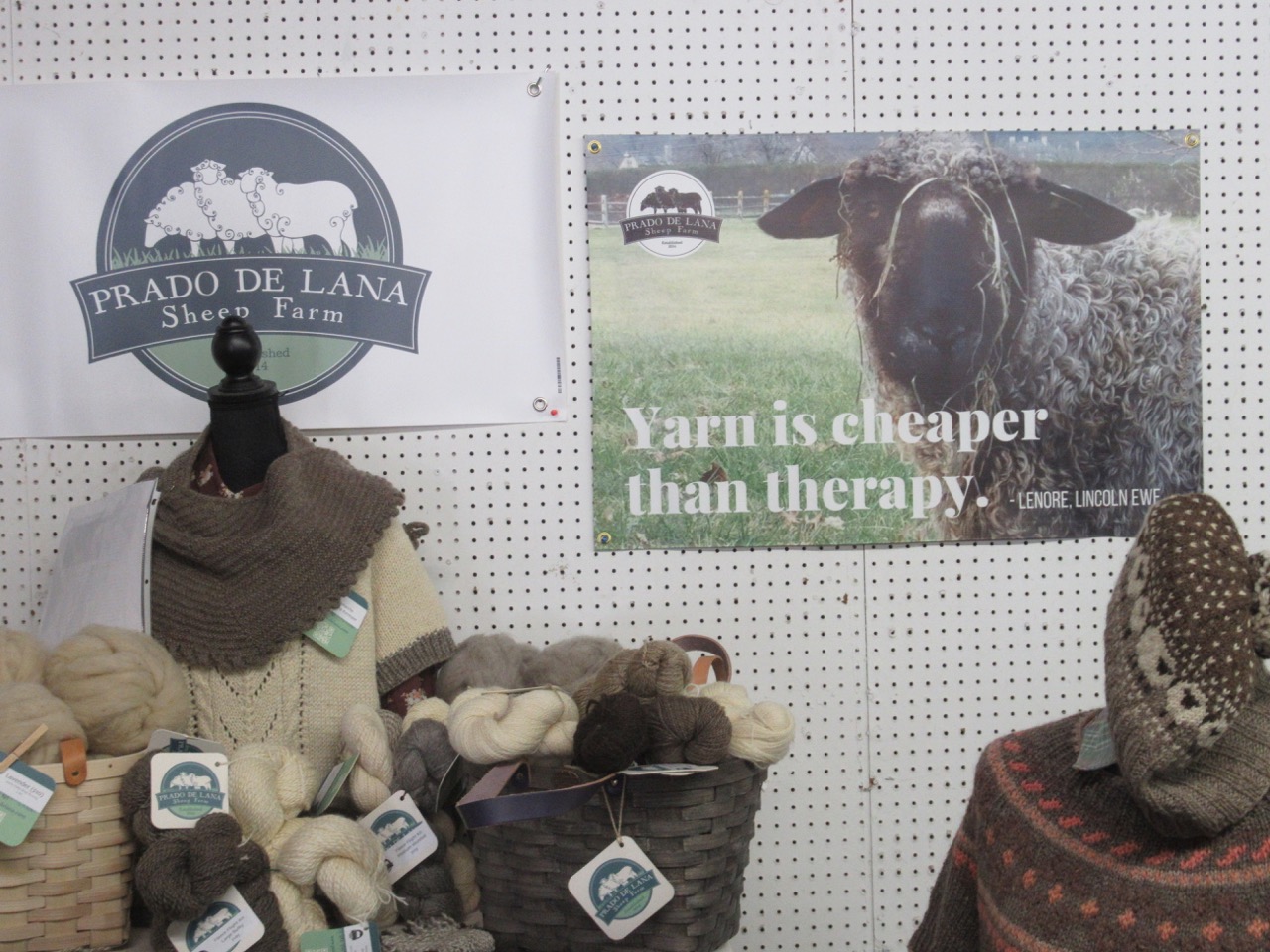